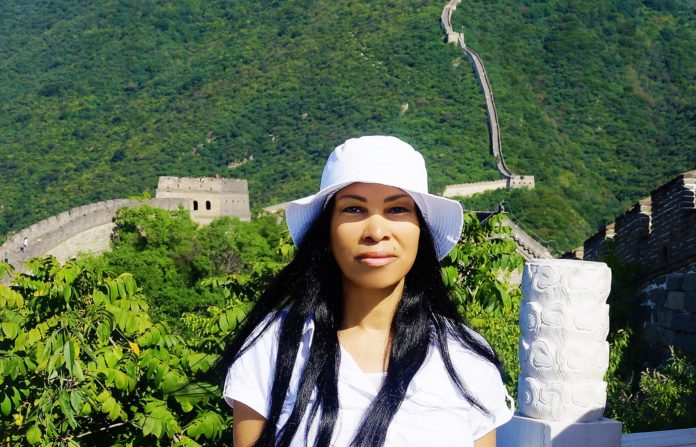 Born on January 6th, 1964, Woni Spotts was the only child of Roger Hamilton Spotts and Betty Spotts. Roger and Betty were both entertainers. While Roger was a composer, songwriter, and expert saxophonist, Betty was a skilled pianist, singer, and songwriter, as well as a dancer. The influence made Woni pick up the piano as well.

Because of the nature of their work, Woni’s parents had to travel a great deal, and being the only child, Woni would accompany her parents on their innumerable trips. So began the journey of Woni to be the first African American to travel the world.

In an interview, Woni said that even though she did not have plans to become the first African American female traveler, she knew from the trips she took with her parents that she wanted to explore the world more.

Ahhh Switzerland, I could go on and on. 1. Every region is special and shares culture with neighboring countries. While visiting Heidi’s Village, I was truly charmed by the pristine countryside. ? 2. I actually received condolences from the Swiss for the election of the current American “president.” ? 3. Speaking of politics, I’m aware of Switzerland’s dubious connections. The Swiss Guard protects the Vatican and Nazi’s used Swiss banks but the day to day political system in Switzerland runs like a fine timepiece. I now know that governments CAN operate with accountability and very little corruption. The United States and other clone governments throughout the world, CHOOSE to be corrupt. Corruption is part of their income. ? 4. A tear was brought to my eye when I saw “honorary boxes” along the quiet roads. The boxes have a slot that allows the visitor to leave the amount of money they feel is fair for the nearby refrigerated food. I was genuinely happy to see a community living with such honesty. ? I have traveled the world researching religion, culture, and history but I also study attitudes like happiness, honesty, and inclusiveness. When I visited West Africa and the South Pacific, I encountered children in villages that refused to accept food, experiences, or gifts from me unless I included their entire group. They didn’t want to make the others feel bad or left out. The attitudes are not genetic, wealth-based, regional, or entirely environmental. ? Imagine a world where children didn’t mock each other for not having school lunch money or the latest clothes, a place where the mentally ill and homeless are not left to fend for themselves in the streets. This is called civilization. ?Can civilized behavior be taught? ❓❓❓❓ #switzerland #badragaz #heidisvillage #maienfeld #africanhistory #travelgram #blacktravelmovement #nomadness #soultravel #essencetravels #travelnoire #FirstBlackWoman #firstblackwomantotraveltoeverycountry #thefirstblackwomantotraveltoeverycountry #firstblackwomantovisiteverycountry #thefirstblackwomantovisiteverycountry #blackhistory #blackpast #africandiaspora #wonispotts

While talking to Hey! Dip your toes in, Woni said:

“I remember many trips to the Caribbean and the Philippines in those early days, I remember being in Japan and demanding a burger!”

By the time Woni was 15, she had already started her journey. She was offered a role in a documentary, this was named “Passing Through.” The project was led by Nolan Davis, who was not only a renowned journalist, author, and screenwriter; he was also Roger Spotts’ best friend.

From the year 1979 to 1982, she had traveled to more than half of the world. The decision to  be part of the documentary had helped her check off most of the countries on her travel list, including Nigeria, Lagos, and parts of Eastern Europe.

“I was little more than a child at the time and don’t recall many details from those trips, but I do recall Lagos. It was busy and hot!”

Neither the demise of her parents nor the end of the filming stopped Woni from traveling more. However, she did take a break when the filming stopped. She made use of her time by continuing her studies. Spotts’ took up business and became an entrepreneur.

“I realized I was getting older and that if I didn’t go to those places [I hadn’t been], I was never going to go. I was tired of looking at the pyramids in documentaries, and so I said, ‘That’s it! I’m going to Egypt. Egypt or bust!”

She began her traveling journey again, and by mid-2000s, she traveled through France, Monaco, and parts of Southern Europe. Face2FaceAfrica quotes Woni saying:

“When I visited Monaco, I was amused by the fact that you could easily walk from France through Monaco to Italy.”

Uproxx interviewed Woni Spotts in July 2019. The closing question at the interview was to choose one place in the entire world. Woni said:

“I’m still going to pick Monaco. I don’t care if everybody hates me. Monaco wins. It was little. It was clean. I could walk to France and Italy. You can fly anywhere you want. That’s the place to be!”

From 2014 to 2018, Woni took more tours around the world. She visited Germany, Greece, and Spain. Referring to her visit to Greece, she said that Santorini Island was beautiful, and she would love revisiting it.

Woni made a stop in every country. She covered 33 countries from the year 2014 to 2018. She traveled to Canada, Belize, Ecuador, Chile, Bolivia, Morocco, Mexico, Peru, and Egypt, too.

“I’ve been amazed and fascinated by mysterious and ancient structures found in Easter Island, Egypt, Bolivia, Peru, Mexico, Belize, and others.”

She joined tour groups on trips around the world. She didn’t shy from getting help from local guides for organizing tours, and that enabled her to go on expeditions to Antarctica and various other remote parts of the world.

“In Antarctica, I was touched when Penguins waddled up to greet me (and others) on the shore excursion from the ship.”

Woni Spotts took 40 years to complete her travel journey. Not only did she travel countries mapped on the globe, but she also made some stops to revisit the places she had traveled to while she was filming “Passing Through”.

Woni stated that she was compelled to return to most of those places since at the time when she was originally a teenager; she did not understand and fully appreciate the places. She said that being an adult helped her delve deeper into the cultural and religious values in certain cities. Woni made a point stating that back in those days; she was trying to make herself comfortable.

Uproxx asked Woni as to what was her favorite part about traveling. She said,

“I like the different cultures, how they spend more time with their families.” She further added, ”A lot of people are happy. I look to see if these people are happy. And if they’re happy, I think, ‘That’s all you can really want.’

On 28th September 2018, Woni made her last stop – Turkey. The trip marked the end of her journey around the world – the journey of traveling to 197 countries and many territories.

In April 2019, she received her certificate from the Traveler’s Century Club. The association is known to present certificates to everyone who successfully travels across a hundred countries. Being the first African American to travel the world, Woni Spotts was additionally recognized by a tourism board registered company for traveling to 197 countries and many territories.