The wind is a horizontal flow of air masses caused by a difference in temperature, ie. a spatial difference in air pressure. Its characteristics are greatly influenced by geographical factors as there are parts of the planet Earth where the so-called constant winds blow. In such areas the use of power has become more appreciated and rather profitable.

The shores of the ocean and the open sea represent good positions to benefit from it. Offshore stands out as the best position due to favorable conditions, but the prices of installation and transport of energy hinder such exploitation. The best thing about this is the fact it turns the kinetic power into more useful forms such as mechanical and electrical.

Maybe you haven’t thought much about it as nowadays we get everything prepared and ready to use – but it’s a pity to miss reading more about it and realize how it functions. So, let’s find out more about the numerous benefits it offers us.

This energy is clean, which means that it doesn’t pollute the air –  it doesn’t emit carbon dioxide or cause acid rain like some of the options. Also, if electricity is produced in this way, there are no adverse effects on the environment, as in this way it’s perfectly protected from greenhouse effects, as well as toxic or radioactive waste.

When planning new capacities, many energy companies opt for wind farms since their implementation makes economic and environmental sense. Every kWh (kilowatt-hour) produced by this kind of source replaces the same that could be produced in fossil fuel power plants. This results in a reduction of negative impacts on the environment, and especially CO2 emissions into the atmosphere.

2. It’s one of the best sources of electrical energy

Today, the energy in question is mostly used to produce electricity. Windmills that once had pretty different purposes are now used as modern generators and they’re most often installed in the form of the above-mentioned farms. The most frequent option is placing several generators in one location suitable for that purpose, but they can also be placed individually, in order to produce electricity in remote locations, where the installation of power lines is a large investment.

A windmill is powerful enough to supply a small village or settlement with electricity. You get absolutely waste-free and clean electric energy without any by-products or similar elements, which will have its major use in households or industries.

Renewable energy belongs to the inexhaustible resources needed for usual human needs. As a source corresponding to this description, wind power is one of the safest technologies for generating energy when the stage of development is reached. It’s the only one that has had a dynamic expansion in electricity production in the last twenty years, compared to other energy sources.

With about 121 GW of installed capacity, this kind of power is the most represented renewable source in the world last year, compared to the period from ten years ago when only 10 GW was installed. In the coming period, as one of the most important elements of this kind, it’s expected to take a significant place in the overall world energy balance.

4. It doesn’t occupy much space, but it’s useful

The generator can be placed on unused or infertile land if the basic conditions are met. What does this mean? They need to be situated on the surfaces where strong enough winds tend to blow rather frequently, in order to ensure the quality of the power produced. The appropriate height is also a requirement that needs to be fulfilled. Of course, there are numerous other things to take care of when it comes to this, so it might be great to check blogs and relevant articles, like the ones you can see if you click here.

The turbine itself takes up little space on the ground, which means that it won’t occupy much space on any property, but the results will be totally worth all the effort made.

5. It’s not expensive as some other options

In addition to all the positive aspects of using wind as one of the power sources, another highlighted benefit is cheap maintenance, as all bigger costs are centered on the initial investment for installation. Apart from that, it’s definitely the most inexpensive way of utilizing this type of power, so it’s easy to see which factor is responsible for its immense global expansion.

Electricity obtained in this way is often the cheapest one, as well. According to some research carried out by scientists and experts, the price of a kilowatt of electricity from new onshore farms today is only five to nine cents.

6. It has increased the number of job vacancies

Wondering how this might even be possible? Well, the thing is simple – with the emergence of new systems that treat this kind of production, the need for new workers increases. And it’s not a small number of people that manage to find a job in this industry.

Some pieces of information from a couple of years ago state that the United States sector that’s in charge of the wind industry has offered jobs to more than one hundred thousand people – which is quite a lot. And not only that, but it also shows that this sphere starts growing even more than it was growing before, which is encouraging.

Thus, this energy as part of renewable sources is getting increasingly explored and exploited, as it has become clear that it truly has numerous benefits that might help the whole planet. Its potentials, although known from the era of ancient Egyptians, are beginning to be considered serious resources today, so it’s easy to conclude that this kind of investment can be expected to become even more successful.

With the growing popularity of the idea, a slight decline in the cost of its production begins, and with that, this power type becomes increasingly competitive with traditional fossil fuels. Having all this in mind, why wouldn’t we simply use what nature gifts us with and improve the overall wellbeing of the only planet we’ll ever have to live on? 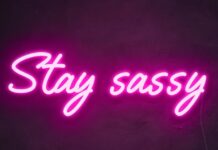 Sassy Neon Signs To Soar The Temperature Of Your Apartment Bar