Home Art Who is Banksy?

The infamous street artist who goes under the moniker of Banksy is both well known and completely unknown to the world.

Rumors regularly swirl on the street art forums about Banksy’s real identity and where he’s from.

I think it’s probably safe to assume that Banksy is from, or at least a resident of, Bristol.  Bristol is a medium-sized city in the southwest of England, where, much of Banksy’s early work has appeared on the city’s streets, nearby Cheddar Gorge and he also hosted his major outdoor exhibition Dismaland just down the road in Weston-Super-Mare.

Now a street artist with a global reputation, Banksy has somehow managed to keep his identity largely secret, although there are plenty of commentators in agreement over a couple of names of who he is likely to be.

Active since the early 1990s, he is said to have been inspired by the graffiti artist 3D (aka Robert del Naja), who also happens to be one of the founding members of the band Massive Attack.  There have been persistent rumors that Robert del Naja is actually Banksy, but there isn’t much evidence to support this theory apart from touring dates which occasionally match up with new works by Banksy.

Gorillaz artist Jamie Hewlett is also rumored to be Banksy, but most find this theory even less likely.

Banksy has often been assumed to be a young man named Robin Gunningham who grew up close to Bristol and then in the mid-1990s moved to London.

The timings of his life in Bristol and London would also correspond quite closely with new activities in both cities.

Drum and Bass star Goldie also referred to Banksy as ‘Rob’ in an interview once which gives further credence to the idea that Gunnigham is behind the mysterious artist.

School friends of Gunningham have confirmed that he went under the moniker of Robin Banks during his early graffiti activities, and like most school time nicknames, it’s easy to see how Robin Banks could have ended up as Banksy over time.

The first known mural by Banksy was in 1997 and titled the Mild Mild West, featuring a teddy bear throwing a molotov cocktail at police officers.  It’s widely assumed to have been painted over long ago.

Nowadays, Banksy’s works are often seen as instant millionaire status, with property owners quick to board up or install protective perspex coverings over the works in attempts to preserve them.

Some of those who have been lucky enough to receive a nocturnal visit from the elusive Banksy has had the artwork professionally removed in order to sell it to collectors.  Unfortunately, taggers or ‘rival’ street artists sometimes get to the artwork first in order to destroy it or render it worthless by pouring paint over it or spraying their own tag over the top, which is pretty frustrating for everyone who is interested in it.  I’m pretty sure it doesn’t create any extra exposure for the competing artist, and I definitely wouldn’t be adding myself to their Instagram followers!

On the subject of money, Banky’s net worth is rumoured to around $50 million. Who says ‘crime’ doesn’t pay?!  Though, personally, I wouldn’t class graffiti as crime.

Banksy’s identity was thought to have been revealed during a trip to Melbourne when a young woman walking home via Hosier Lane caught a graffiti artist spray painting a new work.

As she approached the piece she saw his traditional stencil signature and tried to catch up with. As you can hear in the video, he’s pretty vocal about not wanting to be being caught by her, but I’m not entirely sure that whoever she thinks is Banksy in the video has much of a Bristolian accent or looks around years old. The jury is out on that particular sighting.

Banksy has painted several famous pieces in Melbourne, including the popular Little Diver piece near the police station on Flinders Lane.  Unfortunately, Little Diver was destroyed with a tin of paint in 2008 but did have a good inning, having been painted in 2003.  That’s five years longer than most of Banksy’s pieces last in London!

To preserve his anonymity, he gives very few interviews, although in one with Simon Hattenstone feature in The Guardian in 2003, he is described as being “white, 28, scruffy casual—jeans, T-shirt, a silver tooth, silver chain, and silver earring. He looks like a cross between Jimmy Nail and Mike Skinner of the Streets.”

In the 2010 documentary film Exit Through The Gift Shop, Banksy is interviewed, although we glen very little as to his or her identity.  This could also have been some clever misdirection on the behalf of the director, as there has been alot of discussion over the fact that Banksy may actually be a collective of artists rather than an individual.  Perhaps interviewing a skinny white male in his 30s, with shadows over their face making them indistinguishable and a disguised voice gave the viewer what they expected to see rather than revealing anything new or giving any fresh clues as to their true idenity.  Maybe it was just another chance for Banksy to throw us off the scent and keep us guessing?

Although Banksy’s works have shown up all around the world, including Bethlehem, LA, Utah and Paris and official exhibitions have been held in New York and LA,  it seems that London is probably his primary place of residence from the information we can gather with new pieces usually found in the southern part of the UK.

With graffiti being largely illegal, it’s understandable why Banksy might want to conceal his real name and remain anonymous, but to those of us who are interested, we’re intrigued to know his or her true identity, yet we don’t really want the truth to be revealed and for the illusion to end.

Melbourne photographer Simon Woodcock of Man With A Camera Photography is a keen follower of Banky’s work and has followed his activities in order to photograph his street art in London, LA and Melbourne. Check out his work! 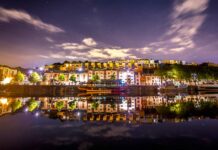