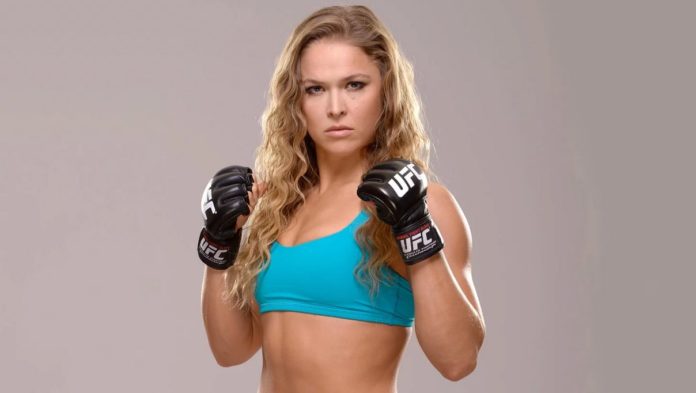 Ronda Rousey is a famous American mixed martial artist, wrestler, and actress. She is famous for being the first American woman who won an Olympic medal in judo.

The biography of this athlete is indeed impressive. So, if you are interested in reading all about this famous athlete, including her details from her biography, personal life and net worth in 2019, please continue reading the following text!

Born in 1987, Ronda Rousey was raised in California. Her father’s name is Ron, and mother’s, AnnMaria De Mars. She is the youngest of three sisters. When it comes to her education, Rousey dropped out of high school in order to pursue her athletic career. However, later she managed to graduate.

Ronda is married to a UFC fighter Travis Browne. The couple started dating in 2015. Two years later Brownie proposed and they got married in 2017. Currently, they live in Hawaii.

Before dating Browne, she was in a relationship with the UFC fighter Brendan Schaub.

Thanks to her mother, who was also an athlete, Rousey started her judo career at 11 years old. In 2004, at the age of 17, she managed to compete in the Olympics Games in Athens. Unfortunately, she lost. However, 2004 was not unsuccessful. Rousey competed in World Junior Judo Championship and won a gold medal. In 2006, she continued paving her path as a professional athlete. Winning another gold medal in World Cup (held in Great Britain) and a bronze medal in Junior World Championship made her recognized worldwide. Also, she was the first American woman to win two Junior World Medals. The year 2007 brought even more medals – gold medal in Pan American Games and silver medal from the World Judo Championship. In the following year, Rousey made history. She was the first American woman who won an Olympic medal in judo.

When she turned 21, she decided that it was time to retire from judo. However, that did not mean retiring from sports. At the age of 22, she started practicing MMA. Her first professional MMA debut was in 2011.

Her successful MMA career led her to being a part of the Raw brand and signing a contract with WWE.

Not only is Ronda Rousey a successful athlete, but is has also got some acting skills. In fact, she had some remarkable performances in numerous movies. In accordance with that, the critics were amazed by her portrayal of different characters. She starred in movies like Road House, Mile 22, Entourage, The Expendables 3, Furious 7, etc.

In 2020 Rousey’s net worth was estimated to be around 15 million dollars. The majority of her incomes is related to her MMA career. Also, she earned from judo and acting career as well. Furthermore, she has done numerous campaigns for famous brands like Reebok, Metro PCS, and Monster headphones. Considering Rousey’s MMA career, paid appearances, and social media earnings, her net worth is expected to grow in the future.

Ronda Rousey is one of the most successful and inspiring female athletes in American history. Thanks to her persistence, hard work and talent, she has managed to achieve a lot at a very young age. Not only has she managed to pave the way for younger female athletes, but she also serves as a living proof that anything is possible if you put in the effort.

Billy Voss - September 30, 2020 0
Every year, CBD is used more and more popular and is more prevalent in official medical circles. It has been proven to cure many...

4 Things to Know About The Oracle and TikTok Deal

8 Reasons Why You Must Get Your Car Detailed

6 Reasons Why Online Gambling Is Booming During the Lockdown

5 Tips on How to Teach Your Children About Investment

5 Things You Need to Know About the Life in the...