Home Celebs 10 Most Popular YouTubers in 2022 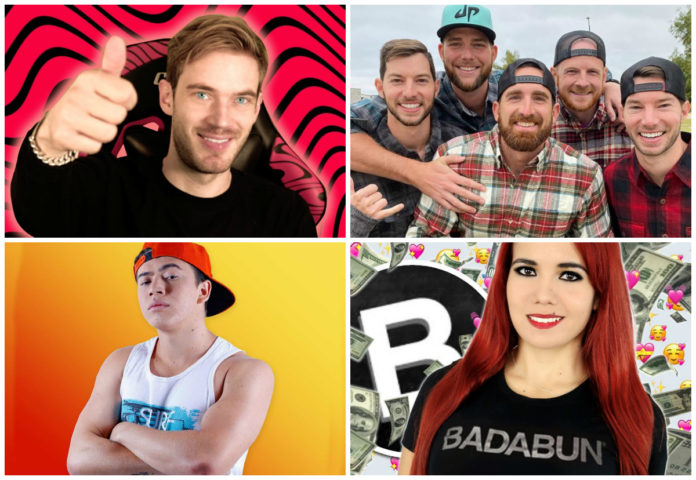 Did you know that 90% of consumers confirmed that they are looking for brands over YouTube? That doesn’t necessarily mean that they will buy the product from a brand they see on YouTube. Still, it serves as the most effective informational channel. The reason for that is simple – the number of people that are working as YouTubers has drastically improved.

There are millions of YouTubers from all parts of the globe that are trying to impress their audience. However, only 8 thousand of them have achieved to reach more than 1 million subscribers. Logically, the competition is tougher than ever.

Various factors can have an impact on your success on Youtube. Still, there are 2 basic things that you need – high-quality content and high-quality equipment. The first factor is the more complex one. Successful YouTubers needs to actively share content on their channel. Besides that, they need to constantly be active and creative. It is not the point to share the same content. Getting good equipment is an easier task. If you are interested in finding a good camera, you should check FindTheDecision.com to find out which cameras could satisfy your needs.

Anyway, learning from the most successful YouTubers will help you understand how the entire Youtuber world works. That’s why we want to highlight the 10 most popular YouTubers in this year.

For a longer period of time, PewDiePie is the Youtuber with the most subscribers. However, that’s not it. His channel is in second place in the world behind the YouTube channel of the so-called T-Series Company. His followers tried to help him get the reward for the most popular YT channel in the world. Still, their effort was useless.

The main roles on this channel have Cory and Coby Cotton. Besides them, three college friends are assisting them in video creation. The content on their channel is mostly focused on the compilation of trick shots. However, this Youtubers have expanded their content to comedy which brought them more subscribers.

They currently have around 47.5 million subscribers.

The third-place goes to a Spanish-speaking influencer from Mexico. This channel became famous because of the “Exponiendo Infieles” series. He interviewed couples to discover if partners are cheating on each other. Besides that, he is also doing funny street videos. The number of his followers is currently 42.5 million.

The focus of this channel is on a young Russian-American girl whose name is Stacy. She plays with toys, goes on adventures with her family, etc. Besides that, this young girl has 2 additional YouTube channels – Funny Stacy and Stacy Toys.

This channel has similar content as the previous one. Still, it has around a million subscribers less. The main characters on Kids Diana Show are Diana and her brother Roma. You will be able to find videos of these two Russian-speaking kids going to different sorts of adventures, unboxing toys, etc.

If this looks like a confusing word, it is – Whindersson Nunes. This guy is from Brazil and he is vlogging since he was 15. You can find various types of content such as movies, reviews, songs, parodies, etc. Still, all these things are related to his everyday life and probably the lives of other people. He currently has nearly 38 million subscribers.

This channel currently has around 38 million subscribers. There is a reason why we added two different names in a subtitle. His first channel JuegaGerman was the most popular channel across South America. The focus of this channel was on video games. Still, he expanded his content with comedic content which has brought him even larger success.

However, he also has the second channel under the name HolaSoyGerman. This channel has 39 million subscribers. However, Garmendia did not publish anything there in the last 2 years.

The name of this channel was different at the beginning of the career of this Spanish guy. Ruben Doblas Gundersen started a channel under the name ElRubiusOMG when he was only 16. The biggest success he achieves 5 years later. He does walk-throughs and reviews related to the gaming industry. He currently has nearly 37 million subscribers and he is one of the most successful YouTubers in Europe.

With “only” 35.2 subscribers, this guy comes to the 9th place on this list. He is one more Youtuber located in Brazil. His content is mainly focused on making vlogs and videos about his daily life. Still, he also covers current trendy news about celebrities. He achieved the biggest success 7 years ago. At that moment, he was the only Brazilian Youtuber with more than 1 million subscribers. Besides that, he published a Netflix original comedy special under the name – “My Life Makes No Sense” 2 years ago.

Luis Fernando Flores is located in El Salvador and he is the most successful Youtuber from that country. He currently has 34.3 million subscribers. Still, when you see that El Salvador has only 6.5 million citizens, you can understand how big his success is.

On his channel, you can find two different categories – gameplay videos and wacky antics. He usually streams alone, but it can happen that his dog sometimes appears in his videos.

All these people were trying for years to achieve the success they have today. First of all, they were analyzing their audience in order to understand what they would want to see and hear. Besides that, they were constantly investing in the necessary equipment such as microphones, cameras, etc. Hard work, commitment and active investing are three things that will ensure success. Avoid buying fake subscribers and likes. Those things are only an illusion of success.