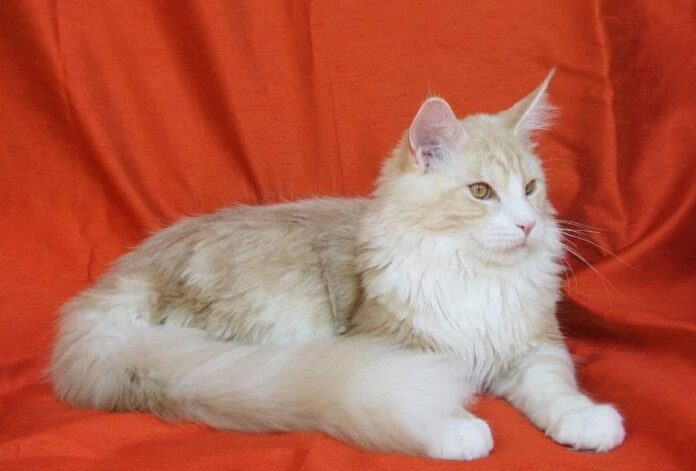 The Maine Coon is an amazing breed of cat and adored pet. As the second or third most popular cat breed in America, and millions of owners around the world, it’s safe to say many of us are charmed by this plus sized, friendly feline. Here are 7 facts you probably didn’t know about Maine Coons.

People are shocked when they see a Maine Coon for the first time. Because these cats are big, really big. In fact, they are the biggest natural domestic cat breed and after seeing one, it’s obvious. A typical male is between 18-25 pounds and a female is between 10-14 pounds! From nose to tail, they can measure between 30-40 inches in length. And that’s just the average, Maine Coons can get much bigger!

A Maine Coon’s physical characteristics lend even more to its overall feeling of mass. First, there are those oversized paws that are one and half to two times larger than normal cats. Then, those whiskers – the longest of any domestic cat! Another defining trait is the luxurious, long and fluffy tail. The tail is the stuff of myths, and the reason why people thought this breed had interbred with raccoons.

Compared to normal cats, Maine Coons are wider and thicker everywhere, with jumbo limbs and a strong, wide chest. Place your regular cat next to them and the regular cat just looks thin and anemic. Thick bone structure and big muscles indicate an athletic cat, and this is certainly true. This breed was adored for being amazing mousers and catchers of vermin. And actually this is the reason they got to travel!

Speaking of personality – Maine Coons have this in abundance! After the initial shock wears off from seeing one, the next thing that gets you is its personality. To put it simply, this is one of the most human-centric cat breeds out there. The breed genuinely loves their owners and adores them. They will follow their human from room to room, sit next to them while relaxing, and also do goofy things to get attention.

The breed is also known for being quite chatty. But, they generally are not “meowing” like normal cats. No, that’s too typical. The sounds this cat makes range from various chirps all the way to trilling. Trilling happens when a Maine Coon is bird watching, parked by a window or open area. They sort of sing, as if mimicking bird chirps. This is likely a predator trying to attract its prey, but owners take it as their beloved pet communicating with them and telling us to look. Either way, it’s adorable and a signature of the breed.

These cats are also great with strangers and social situations. Most cats are skittish and want to hide when people are around. Not this breed! In fact, there’s a big chance they will be the first one to walk up to the new person and introduce themselves. My girl even walks into apartments next door to explore because of her curious and friendly nature.

Movie star looks with a great personality – you know it ain’t going to be cheap! Expect to pay anywhere from $800 – $2000 USD for a pedigreed (with papers) purebred kitten from an accredited CFA or TICA cattery. If a certain cat is “show quality”, the price can exceed even that… if they will even sell to you!

Why is the price of Maine Coons so high? According to Mainecoonhawaii.com, supply and demand is the first thing. Quality catteries cannot produce too many kittens a year – a queen must rest between litters.

Next, the amount of people who want to own a kitten is high. They talk to a breeder and get on a waiting list. When it’s their turn, the good breeders vet potential owners to ensure their babies are going to a good home.

The other thing to know is that Maine Coons cost a lot to raise, breed, and show. Think about costs of owning one cat – essentials like food, litter, toys, scratching posts, accessories, little boxes, vet visits, medications, and so on. Now, multiply that by 5, 10, or other reasonable number! Also don’t forget, breeders often take care of a kitten’s first shots, vaccinations, and have them spayed/neutered as well.

That high price tag covers some of those expenses. At the same time, breeders often show their cats in cat shows to raise their reputation and show off their genetic lines. Often, a person starts a cattery because they are already showing their cats and it’s a logical next step.

As if “Maine” in their name did not give it away, right? The descendants of these cats as we know them settled in the Northeastern United States. These cats then started interbreeding with the cats already there and over time, the hardy Maine Coons of today emerged. This beloved  breed is actually the official state cat of Maine.

It’s also important to note this breed not only got their start in Maine and the New England region – they also thrived there. Farmers noticed these athletic and friendly cats, and started using them as barn cats, catching mice and vermin in farms. Once they were indoors, humans stood no chance. The winning personality and wild, yet domesticated looks dazzled people. Cat shows were the next step. By 1895, a Maine Coon named Cosey had won the Best Long Haired Cat In Show category at a cat show in Madison Square Gardens.

Not only are Maine Coons large and in charge, they also have a beautiful, silky, long haired coat. This coat is made up of two layers – the normal coat, and a dense undercoat.

This breed needed the extra insulation because they lived in New England, which is home to long, harsh winters with snow, ice, and rain. The unique shaggy coat is not only amazing to look at, but it’s perfectly functional, too. You may look at their coat and think that is high maintenance, prone to tangling and daily brushing.

On the contrary, their long coat is less work to maintain than it seems. A good brushing every few days and a good session with a deshedding tool about twice a week is all you need. Because these cats are a completely natural breed, Mother Nature assured they aren’t prissy to be able to thrive in the winters of New England!

Before Maine Coons got their start in America, their ancestors arrived on these shores as ship cats with sailors from Scandinavia and Northern Europe. Sailors had cats onboard for the long journey for the same reason as the New Englanders – cats are excellent mousers and catchers of critters.

Common accepted knowledge is that these ship cats were mixed long-haired breeds or Norwegian Forest Cats. How do we know? The Norwegian Forest Cat AKA Wegies, found in Norway and Scandinavia, are very similar.. They share the large size, long coat, fluffy tail, and more physical features. Where they differ is mainly head shape (Maine Coons with a square head and Wegies have a triangular shaped head) and personality.

Maine Coons are more goofy and sociable with humans, and Norwegian Forest Cats can be  more aloof and independent. Of course, these are just generalizations, each cat is unique in personality.

In the personality section, we spoke about how Maine Coons are social cats and good in new situations. This speaks to their intelligence. Because of their smarts, you can very easily train them to do interesting things, much like a dog.

Cool things like that essential dog-like activity – going for a walk! Just buy a harness and leash, and determine if your cat has the right personality. If they are always curious and slip out the door every time you open it, they would be a prime candidate for harness training. It takes time, but search online and you’ll find heaps of Maine Coons walking outside and enjoying nature, like their ancestors.

What else can this breed do? Many of them like to play fetch with their owners. And with a simple clicker and some treat, tricks like sit, shake, stand, or jump is all possible. Not all Maine Coons can or want to do this type of activity, but it’s definitely in the realm of possibility!