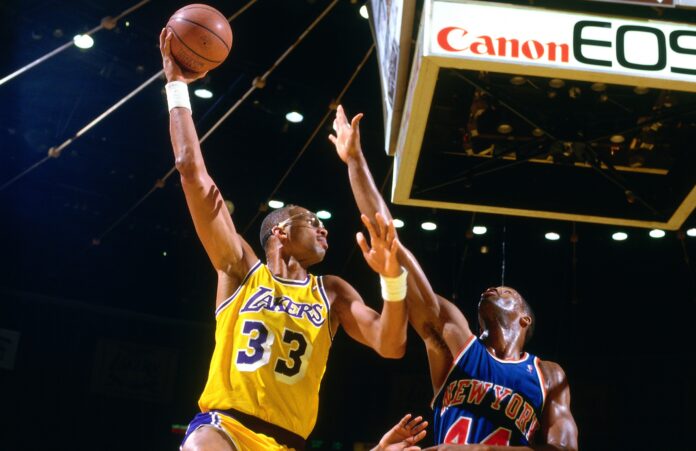 If something represents the peculiarity and uniqueness of a sports team, as well as a sign of recognition in a sea of ​​others, apart from a great game and enviable results, it’s a jersey. At least at the LA Lakers, over the years, one could see an enviable collection of uniforms that left fiery fans breathless again and again. Made for special occasions, holiday seasons, as a tribute to the legendary players who left their hearts on the field… The yellow-purple crew had all kinds of days in their long and prosperous career, but what’s still remembered today are the jersey designs and their use throughout the history of this team.

It’s time to look back at the nine best and most memorable (for good!) jerseys from the very beginning. Some of them will make you feel old when you look at them and recognize them, since they date from the sixties of the last century. Some of you won’t be familiar with them if you’re not a really, really big fan, but you’ll absolutely know about those that followed the beginning of the new millennium. Still, it doesn’t matter – enjoy this retrospective and evoke some fine sports memories!

If you’re a faithful follower of this team, you shouldn’t be particularly surprised by the fact that Showtime Gold is forever one of the most noticed and loved jersey designs in the history of the crew’s existence. There’s simply no time that flows and that can take away the memory of it, having in mind that it convincingly wins when it comes to this category. The casual and at the same time elegant design and bright yellow color and purple numbers shaded with white delighted everyone so much that certain elements were used even after the end of this period as part of some other designs. They testify to the brilliant eighties and the inevitable and legendary trio responsible for so many victories and titles – Johnson, Abdul-Jabbar and Worthy.

Perhaps the most unusual color combination ever. Yellow? Not present. Purple? Absolutely gone. The blue and white combination definitely doesn’t fit into any of the color standards we mentioned. However, that didn’t stop this jersey from winning the hearts of countless fans and forever being remembered for the period just before moving to LA – before they even achieved what they were later and while they were still Minneapolis Lakers. In addition to looking pleasing to the eye thanks to the wonderful shade of blue, this uniform is a witness to some other periods precious to the team, reminiscent of its long history and some of the paths it has taken on the road to success. It briefly returned at the beginning of the 2000s, more precisely 2004-2005 as a fine refreshment and a reminder of the old, good times

This jersey dates back to a time that was a turning point for the Lakers on many levels, just before the one in which Showtime will take place. The main change is in the relocation of the team from Minneapolis to Los Angeles – the decade that followed brought records that haven’t been broken to this day, such as the one of 33 games won in a row. The uniform got an almost golden color – it was darker yellow – purple, slightly beveled logo and white letters with a purple shade.

Just as the name suggests, white dominates the uniform which was presented in 2003 as a tribute to the famous announcer Chick Hearn, one of the most recognizable voice personalities in the history of basketball. After his death, the Lakers decided to pay tribute to him with this magnificent jersey. It was primarily intended to be worn only on Sunday matches, but that has changed on several occasions. Kobe Bryant wore it during a 2006 game in which he scored ingenious 81 points in the fight against the Toronto Raptors.

Another mostly white uniform, specially made for the 2015 holiday season. The position of the purple number isn’t the middle, but it goes a little to the side, and the ornate font goes so well with the time of year for which it’s intended. In addition, the team enriched the entire outfit by playing matches in a combination of this jersey and Christmas socks! Sadly, it was the only occasion in which it appeared, but it’s not excluded that the Lakers could wear it again during some future holidays.

Very similar to the Home edition, but unique in its own way, the jerseys belonging to the Away collection are among the simplest we’ve had the opportunity to see throughout the history of this team. Although designed without too many additional details and shading of the letters on the logo and numbers (they’re only bordered in purple), the royal gold color and a few vertical stripes of the well-known purple were enough. Impressive enough to be remembered for years.

In 2017, the team also decided to play the games of that season in the magnificent black and gold jerseys, produced by the Nike company, in honor of their teammate, Kobe Bryant. We see the familiar font and style in which the player numbers are written, but this design definitely brought a fresh breeze. The color was chosen because of the ‘Black Mamba’, as Kobe called himself, and that nickname spread among his teammates and fans. Given that the basketball scene has lost this wonderful man and great player this year, it was recently announced that the Lakers plan to wear these jerseys again this August in order to embrace the memory of him. Online store Onephyle offers the authentic one for the price of $60 for all the fans who want to do the same, as well.

Here’s the combination of the three colors that were most often combined on Lakers uniforms – golden yellow, purple and black. And how could it even be different, when the Hollywood spirit deserves the most powerful and luxurious variant, right? The Lakers introduced it in 2013 and mostly reserved it for games on Fridays. What sets them apart are several variants of the cut – there are jerseys with or without sleeves. It’s also interesting that they listened to the wishes of the fans while implementing this one, since it could be heard from all sides that black is one of the most desirable colors. Purple letters with gold borders and stripes in the same colors on the side made it even more perfect.

You had a chance to find out above what the uniforms looked like while the current LA Lakers were the Minneapolis Lakers. However, these jerseys have reappeared on several occasions, in slightly different variants that can absolutely compete with all the other mentioned versions in terms of attractiveness. Unlike the classic blue-and-white scheme, this concept replaced white with yellow, gaining a somewhat exotic and interesting design. Many consider this to be one of the most creative options the team has had and hope it’ll appear again sometime in the future. Oh, and if you want to learn even more about the team, we suggest checking out this site for some great in-depth information.