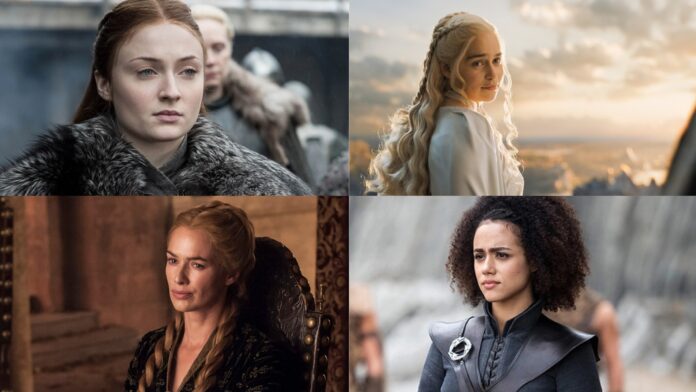 Do you like the “Game of Thrones” series? Or rather – are you a true fan? And besides, do you adore braids and interesting, original hairstyles? Then you will surely be happy with the fact that you can combine all these loves into one and use your favorite series to make a hairstyle that everyone will surely envy you.

All you need is a little time. Read below which hairstyles from your favorite series have left a mark forever. As the seasons of one of the most-watched series have ever heated up, there is growing hysteria about everything that could have something to do with Games of Thrones and its actors, as well as everything that is associated with the wonderful world of Seven Kingdoms.

So we recently had a chance to see creativity at work on Instagram photos of manicures in the style of Ice Dragon or White Walker, and then the original makeup brushes that actually symbolize the houses in Game of Thrones, which delighted us. Now it’s time to move on to the topic of how actors’ hair is styled.

Check out the Games of Thrones ladies below and their hairstyles that you will love!

While she had long hair, Cersei preferred light waves and thin braids to remove hair from her face. After the “walk of shame” scene when the queen became punished and had to shave her head, what she regained her feminine look is just the crown. However, if we keep in mind her role, Cersei looks far more dangerous with her short hair. By the way, Lena Headey, who plays Cersei, has short dark in real life, and she wore a wig for the needs of the series.

Braids – Thanks to the fact that it can be made in countless variants, it has the status of one of the favorite women’s hairstyles for a reason. There are no mistakes with it and it is adequate for both everyday and festive occasions

If you are a fan of the Game of Thrones series, you have probably noticed that it is the braids that give charm to the heroines of this popular series, such as Lena Headey and Sophie Turner, who play the characters Cersei Lannister and Sansa Stark. All you need to create this look is curler, mousse and spray.

This is one of the most hated characters in Game of Thrones, but also one of the most stylish. Machiavellian Lannister usually wears crossed hair with small front locks gathered on both sides of the head. As with other Game of Thrones hairstyles, Cersei almost always opts for soft waves to give her movement and volume.

Emilia Clarke is another actress who has completely deviated from her natural look for the purposes of filming the Game of Thrones series. As a member of the Targaryen family, Deneris has long silver hair, as opposed to natural brown. She wears a wig, and whoever has changed countless different hairstyles with braids, then it’s just the mother of dragons! Her trademark are certainly the penetrating look of the Queen and a tidy hairstyle, and as things change for her in the series, so does it become messier and messier.

Whether her hair is semi-gathered with small braids on her temples or loose and slightly disheveled, Daenerys ’voluminous almost platinum hair raises sighs wherever she goes, and her most sought after and surprising hairstyles are Game of Thrones. If you want to have braid like her, but don’t know how to make it, just visit ring my fashion website for many ideas and tips.

Gentle and a little sleepy, Sansa is the most important princess in trouble. But if there’s one thing Stark survives, it’s her long, straight, red hair, which she usually does in a simple way, without big tricks.

For the needs of the series, Sophie Turner had to paint herself in this brown-reddish color almost every week in order to always look the same. As she gets older, Sansa has darker, but still retains her distinctive appearance. Her best styles include loose and a few braids, and just like Deneris, she tried different hairstyles depending on which house she was with.
Quite unhappy in her personal life, Sansa tends to pull it into a long, sleek braid. It is often seen with the front hairs gathered in the posterior part of the head with small needles.

We all remember Natalie Dormer from the video Someone new with blonde hair and a shaved head, and she looks completely different in the series! With natural hair color and cute waves and buns, she looks gentle and lovely, just like Margery, who she played.
Perfidy and sensual Margaery Tyrell always wears sexy and glamorous clothes. When she wears her loose hair, she fills it with plugs or waves, and when she lifts it, she decides on hairstyles with volume and small shiny ornaments.

Margaery Tyrell often wore a romantic hairstyle with a half bun that resembled a rose.

We will always be in love with afro curls, and in combination with a braid, Nathalie Emmanuel looks even better! She is so dear!

A practical hairstyle for the war in Westeros, you will agree.

“Red Woman” is famous for her red color, which the actress Carice Anouk van Houten had to have for the purposes of filming. In real life, Carice also has long one, but in a natural dark brown color. Mild waves are, in addition to color, its trademark.

And, there’s another Sister Stark with braids gathered in buns.

Since for most of her role, Arya looked like a boy (and pretended to be a man), it is no wonder that she had short hair. However, while she was training to become one of the Impersonal. Maisie Williams walked around with a cute look, a combination of braids and buns, decorated with jewelry.

Conclusion:
And the last season of Game of Thrones is over. We look back at the fantastic and enviable hairstyles of this series. Endless manes, fantastic braids, impossible styles…