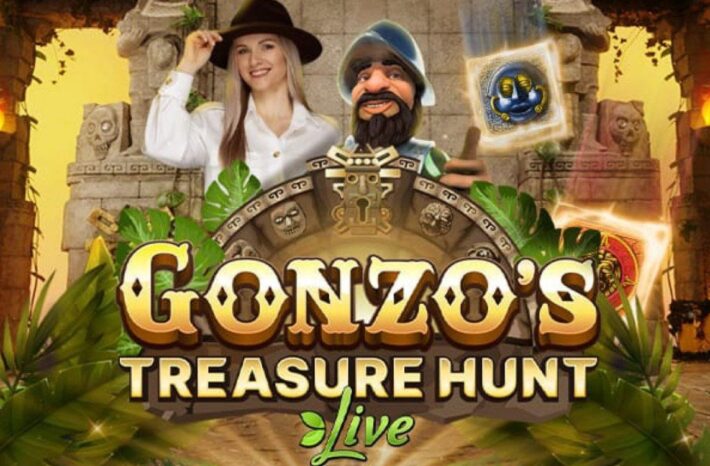 Gonzo’s Treasure Hunt Live is a live gameshow playable on normal and VR devices that features two game hosts – a human live dealer and a virtual Gonzo from Gonzo’s Quest!

This is a hybrid between a live dealer gameshow and an RNG slot game that creates a unique gaming environment. The first online gambling game that used Virtual Reality headsets is Gonzo’s Quest VR slot game, and this is the first live dealer game to do so. Essentially, Gonzo’s Treasure Hunt Live is an elaborate VR live gameshow.

The game was released in mid May 2022 to great critical acclaim as players flocked to play the new exciting hybrid between a slot game and a live gameshow. This is the first collaboration between Evolution and NetEnt, the original creator of Gonzo’s Quest and obviously the owner of the rights to the name and the Gonzo character.

At LiveCasinoComparer.com you can see industry expert Neil explain everything about Gonzo’s Treasure Hunt Live, including the various winning strategies for this game.

Gonzo’s Treasure Hunt is a live gameshow, with two hosts that guide you through four rounds of gameplay. The game is played on a 7×10 grid with stones, similar to the slot game but with many more stones.

The Prize Drop is the exciting part as bonus prizes and multipliers are added to the stones. Finally, the game culminates with The Big Reveal, where all the stones with their respective prizes are revealed and matched to your bets. If you have a match, you win a prize.

Most frequent returns in this game seem to be in the 10x area, though for many players it will make sense to simply invest some funds into chasing the top prize that can be in tens of thousands as you can see above.

Generally, the theoretical return to player (RTP) of Gonzo’s Treasure Hunt Live is 96.56%. That’s when you take the game as a whole. Individual stones – Brown, Orange, Purple, Green, Blue and Red have RTP that slightly differs from the average but are generally the same. 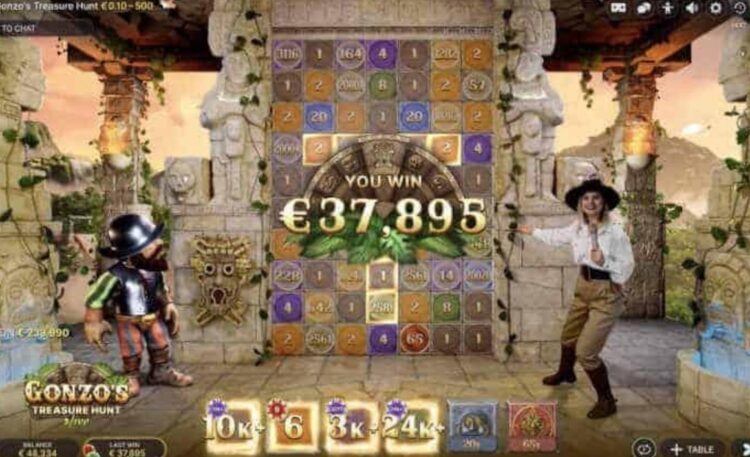 Most players see Gonzo’s Treasure Hunt Live as an opportunity to win big, and no one can argue that this is indeed the best strategy to follow in this type of games, including slots. If a game offers the potential of a big win, it makes sense to chase it rather than being satisfied with minor wins.

Can the game be played without a VR headset?

Yes, the game can be played without a VR headset, and it will look like on the screenshots above. For a full immersive experience however, you’ll want to use a VR headset and get a glimpse into a new era of online gambling. There will undoubtedly be other VR games in the future.

Gonzo’s Treasure Hunt Live is the big thing in 2022 that Evolution did, and the game is already live. What Evolution have in store for us in the remainder of the year are several new games and some game updates.

The next big launch will be Infinite Blackjack, which is basically normal blackjack but with multipliers that increase as you win hands in a row. There’s nothing new regarding roulette except some new native language tables, and baccarat players are preparing for a lot of excitement as Golden Wealth Baccarat with multipliers is set to launch sometime soon. There are also three new games: Bac Bo, Fan Tan and Cash or Crash.

It remains to be seen what will Evolution do after this batch of games is realeased. Without a doubt, there’s some major release such as this game just around the corner!

As for NetEnt, from them we can expect several popular slot game releases, but this is likely to be their only venture into the live dealer scene, as their live gaming operation has been recently taken over by none other than Evolution.

Finally, since Evolution and NetEnt are tied closer together than ever before, we might expect some new collaboration between the two!

Regardless of whether you enjoy live gameshow online casino games, it’s certain that Evolution and NetEnt opened the door to a new and exciting era in online gambling – collaborations and VR. These two developers have never collaborated before and now it’s a reality. This is also the first time that a slot game character grew so popular that it can carry an entire new game on its own. Finally, virtual reality gaming is just getting started and Gonzo’s Treasure Hunt is definitely not the last game to go down this route.