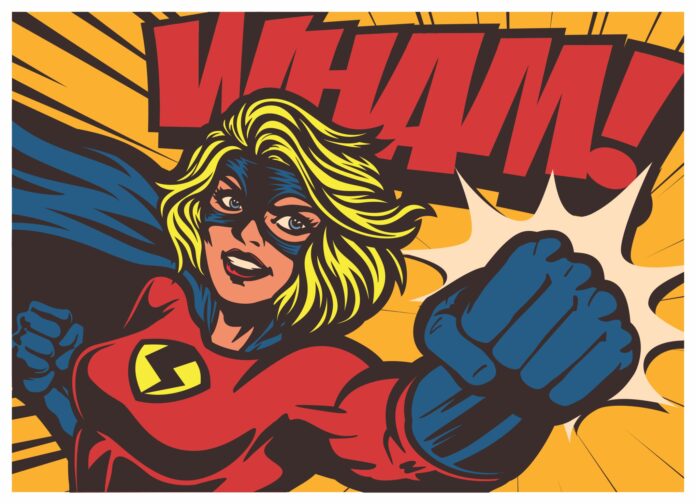 The cartoon world is a safe world for its characters. Let’s face it, if Wile E. Coyote were a real living creature, he would have died 1,000 deaths by now. The fact that he’s only a cartoon allows him to look into the face of death and laugh. With that in mind, it might be interesting to see some of our favorite cartoon characters battle it out to the end. They’d all survive anyway.

Below are proposals for the top five cartoon character battles we’d love to see. Each one was inspired by a T-shirt design offered by Oakland-based Nerd Kung Fu. According to Nerd Kung Fu’s owners, cartoon characters sell very well on T-shirts. For some reason, we Americans seem to have an unhealthy obsession with them.

Do you remember the 1940s Archie and all his friends from Riverdale High? Archie was the typical, clean-cut high school student who always smiled and never had an impure thought. In fairness though, his creators eventually did give him a slightly dark edge. That’s why we would love to see the original Archie battle it out with Wonder Woman.

Imagine the clean-cut Archie fighting the world’s hottest superhero in a winner take all cage match. It is easy to visualize Wonder Woman putting a beat down on Archie while screaming at the top of her lungs, “I am woman, hear me roar!” Afterward, Archie would pull himself off the floor and stagger over to a waiting Veronica, pleading for the end of puberty to come quickly.

Fans of the CW are aware that Archie got a remake with his own TV show a few years ago. Make no mistake that the 2014 Archie is nothing like his 1940s counterpart. If we are going to see Archie battle it out with Wonder Woman, it has to be the original Archie.

Batman and Robin have been best pals since forever. You could make the case that they are the cartoon world’s version of Ralph Kramden and Ed Norton. Batman is to Ralph what Robin is to Ed. The big difference is that Robin actually has a brain. Be that as it may, a dueling Batman and Robin would be fun to see.

The thing about Batman is that he doesn’t have any genuine superpowers. He only succeeds in beating the bad guys because he has better technology. But everything Batman has access to Robin can get his hands on as well. Their battle would basically come down to who was better with the tech.

The smart money is on Robin. After all, he is a teenager. Batman is a middle-aged guy who probably doesn’t know how to program his thermostat.

Some of the stranger superheroes in the cartoon world are based on animals. Spiderman instantly comes to mind. This intrepid hero, whose birth name is Peter Parker, become Spiderman after being bitten by a radioactive spider. Just one bite and Shazaam! Mr. Parker could suddenly scale tall buildings with nothing but his bare hands and some homemade spider silk.

Aquaman is another strange one. He literally becomes a human fish by learning, at the hand of his father, how to survive under water. He is to the deep seas what Superman is to terra firma. He is the one to call if you ever need saving while you are searching for the lost city of Atlantis.

Watching Spiderman and Aquaman duke it out would be rather entertaining. For starters, your average spider isn’t a big fan of water. Likewise, your average fish won’t last long suspended in the air on a spider web. It would seem that the winner of this battle would be the one who could lure the other into his environment and keep him there for the better part of five minutes.

Nerd Kung Fu says that Garfield and Snoopy T-shirts are not highly demanded these days. That’s a shame because both characters have a rich history in the cartoon world. We’d like to see them duke it out just for the fun of it. Of course, we don’t wish either of them any harm.

Garfield’s advantage would be his sly cunning. If you know anything about Garfield as a pet, you know he has very little respect for owner Jon Arbuckle. To him, Arbuckle is nothing more than a source of food. Garfield takes delight in besting his master at every turn. He also gets a strange thrill out of emptying the refrigerator every chance he gets.

As for Snoopy, he is truly a renaissance dog. He is capable of being everything to everyone at any time. He has a thing for Lucy, which might come in handy as a way to motivate him to battle it out with Garfield. Maybe they could fight for her affections. With any luck, you might even be able to pull Schroeder in.

5. Charlie Brown vs. Dennis The Menace

Finally, a battle between Charlie Brown and Dennis the Menace would be absolutely epic. As you know, Charlie Brown has about as much confidence as a small soap dish. He feels so bad about himself that he cannot see clear to getting through life without seeking everyone else’s approval. He is not unlike a lot of us.

On the other hand, Dennis is a walking tornado. He could visit a war zone and still make a mess. Imagine Dennis backing Charlie into a corner and taunting him with ugly comments about his lame Christmas tree and his inability to cook anything other than popcorn and toast.