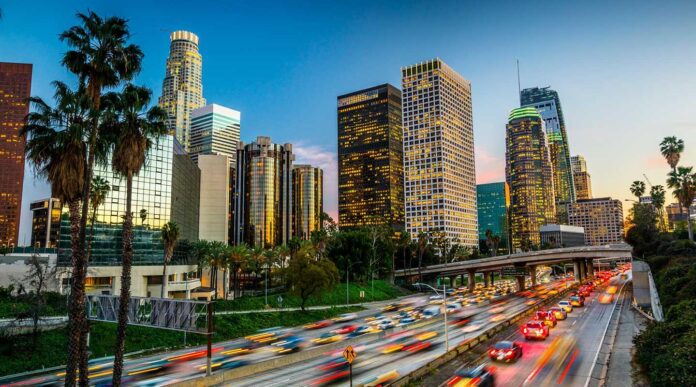 Los Angeles is known as the City of Angels but also the city of endless photo opportunities. There are incredible beaches, theme parks, stadiums, museums, funky coffee shops, and endless modern architecture making this one of the most iconic cities in America.

It is nearly impossible to determine which direction you will be pulled in once you visit Los Angeles. There are literally countless attractions and places to take photos. Gregg Jaden is high on the list for the best commercial photographer in Los Angeles. He is @greggjaden_ on Instagram. Usually known for his travel adventures around the planet, he also frequents local treasures for some irresistible photos. Jaden gives us new perspectives while taking a break from landscapes and exploring the urban vibe of LA. “I usually shoot travel adventure landscapes but always take time for some urban vibes. LA is so diverse, I can shoot inside a cave at Palos Verdes and search for new angles around downtown all on the same day” says Jaden.

For travelers seeking interesting angles at iconic locations shoot at a wide-angle to get the most architecture you can as you tour around downtown LA. A hot spot is a Broad museum. There are literally unlimited angles of this spectacular location.

“When I’m at known locations, I search for new angles and something happening that doesn’t usually happen to try to capture it in its natural element. The shots at Griffith and Santa Monica were all done spontaneously. These are people in their own moments captures as it happened” says Jaden.

LA is labeled as the third most photographed City in the World by Instagram. It is increasingly difficult to find a fresh angle.

Today, Los Angeles has been named the third most photographed city in the world by Instagram. Los Angeles is one of the most famous cities in the United States and of course also worldwide, thanks to its most representative places such as Hollywood, Beverly Hills, Disneyland, Santa Monica, the Walk of Fame, Downtown Los Angeles, among others. More and more people from all over the country seeking to visit and even move to Los Angeles increasingly motivated by visuals on social media.

Here is a list of the city’s most symbolic spots that tourists shouldn’t miss. In order to experience the essence of Los Angeles, it is important to explore each day. Tourist attractions can always be busy but some of the places off the beaten path will amaze your Instagram following beyond their wildest imagination.

The hike up to the Hollywood sign is probably the highest on the list among photographers. Don’t kid yourself this hike looks easier than it is. If it’s a hot day bring lots of water. Griffith Park is right where you will start your hike so plan enough time to do both locations. It can take all day or break it into 2 days. Shoot this one wide and telephoto. Try creative angles.

It’s imperative to visit Downtown Los Angeles and walk amidst its skyscrapers. If a tourist visits the civic center, he will be able to find out the nerve center of the city of stars. In this area, there are buildings that bear the emblem of the City Hall and Cathedral of Our Lady of Los Angeles. For those who like contemporary architecture, it is highly recommended to visit the Walt Disney Concert Hall, Bradbury Building, The Last Bookstore, Skyline/Freeway at the W 4th Street Bridge, and The Broad.

Palm Street is the exact street to take the picture with the palm trees lined up and the Hollywood sign in the background is on South Windsor Blvd between 4th and 5th Streets. This street is sort of a must-visit for anyone visiting Los Angeles.

Anyone visiting the Venice area cannot leave without first taking a walk along its road called the Ocean Front Walk. There’s a kind of typical American muscle training at Muscle Gym which is famous for being frequented by celebrities like Justin Bieber or skateboarder Jay Alvarrez. The place is full of clothing stores, food stalls, ice cream parlors, gift shops, and even street artist shows. Next to the Muscle Gym, there is a large sports area with several volleyball courts, a bicycle area, and many basketball courts, where all kinds of people play games. This is one of the most interesting photography spots with the possibility of capturing a few NBA stars there.

Beverly Hills’ fame is due to the fact that many Hollywood star spottings happen here. It has been the backdrop of many TV series and films. In Beverly Hills, tourists will have the opportunity to see mansions on American trolleys (minibusses with the appearance of the old tram). They can also enjoy a walk through the famous shopping street Rodeo Drive and visit Warner Brothers (one of the most important film studios in the world). A photography opportunity you don’t want to miss is LACMA (Wilshire) at night.

Visiting the Sunset Strip in Los Angeles is almost a must. This neighborhood has its own charm and a very bohemian atmosphere. The city is known for its rock clubs, colorful billboards, “trendy” restaurants, and happening nightclubs. The Sunset Strip isn’t just nightlife … There are tons of boutiques and fashion shops where tourists can spend the day shopping for trinkets. Many famous locations along Sunset so do your research before you go.

Bathing or having a drink on Santa Monica’s beautiful beach is another activity that will let everyone experience the essence of Los Angeles. Walking the streets and finding art displays around many corners. The famous wharf and Pacific Park fairground is a must-see.

There are thousands of places depending on what kind of photos you seek. Usually, most locations are online with easy to follow directions. Happy Travels!

All photos used with permission from Gregg Jaden

Ryan Kavanaugh – One of the Most Influential People in Hollywood

Дмитра Врачарић - September 17, 2020 0
While cryptocurrencies represent a great trading option today and providing many people with the ability to create a sustainable income, the effects on the...

Art and Society: One Sees, the Other Feels

7 Smart Ways to Earn Money as a Micro Entrepreneur –...

5 Most Common Mistakes to Avoid When Renting Furniture – 2020...