Plenty of sports like to lay claim to being exciting, but one undoubtedly stands head and shoulders above the rest – ice hockey.

When you combine the size, skill and speed of the players with the pure physicality of the sport, you have a cocktail for thrills and spills.

On that basis, it is little wonder that ice hockey generates some epic rivalries that fuel plenty of passion both on and off the ice.

Read on as we look at some of the best rivalries in the National Hockey League (NHL) and assess why they are so heated.

When a rivalry has the word ‘battle’ in the title you can be certain things are going to get pretty tasty whenever the two teams meet.

That is certainly the case where the Battle of Alberta is concerned, with no love lost between the Edmonton Oilers and Calgary Flames.

Research by Betway pinpointed a recent spat between two players as the catalyst for this rivalry to significantly increase in intensity.

An ongoing feud between Zack Kassian and Matthew Tkachuk has reignited the hatred between the Oilers and Flames over the past year.

In match-up between the two sides last January, Tkachuk hit the Oilers winger with two brutal bodychecks. After losing his helmet on the second hit, Kassian attacked Tkachuk.

No action was taken against Tkachuk, but Kassian was banned for two games. The teams have been at loggerheads since then, ramping up the bitterness in the Battle of Alberta.

As two of the original six NHL teams, it is no surprise that the Bruins and Leafs have had plenty of bitter fallouts in the NHL.

The intensity has increased markedly in recent years, with the two teams going head-to-head in the play-offs three times over the past nine seasons.

The Bruins’ remarkable comeback from 4-1 in the third period of game seven in 2013 is still fresh in the minds of ice hockey fans in Toronto.

Brad Marchand’s entertaining antics for the Bruins over the past few years have done little to dampen the fire between these two teams.

The Leafs’ re-emergence as a force in the NHL has added another dimension to a rivalry that is showing little signs of abating.

With the Bruins and Leafs pushing hard in the Atlantic Division this season, there is likely to be plenty of fireworks to come between these two teams.

The Knights have only been in the NHL since 2017, but they have already built up a pretty tasty rivalry with the San Jose Sharks.

Much of the bitterness stems from two feisty play-off meetings involving the two teams in 2017/18 and 2018/19.

In their inaugural season in 2018, the Knights met the Sharks in the second round of the play-offs on their way to the Stanley Cup Final.

They went head-to-head again in the first round the following season in a series that featured one of the most controversial calls in recent memory.

The Knights were incandescent with rage when Cody Eakin was handed a questionable five-minute major following an incident involving Joe Pavelski.

The Sharks took full advantage to battle back from 4-1 down to eventually win the game in overtime and clinch the series. A new rivalry was born.

Some pundits argue that the Islanders and Rangers rivalry is no longer as intense as was once the case, but New York natives tell a different story.

The two sides have 50 years of infamous brawls and epic play-off series behind them in a conflict that runs much deeper than what happens on the ice.

Whenever the Islanders and Rangers face each other families are divided, friends fall out and workplaces descend into angry confrontations.

There will be scenarios where a father and son support the Islanders, while a mother and another son are staunch Rangers fans. Make sure you have your tickets ready for the NHL’s first round, and if you’re a NY Rangers fan, now it’s a good time to check NY Rangers schedule and decide on an event.

In soccer terms the rivalry has all the hallmarks of Celtic vs Rangers in the Scottish Premiership or Manchester United vs Manchester City in the Premier League.

Factor in that the Rangers are head and shoulders above the Islanders right now and the battle lines will remain drawn for the foreseeable future.

For sheer on-ice physicality, there is probably no more intense rivalry than the Pennsylvania-based bitterness between the Penguins and Flyers.

The Flyers, aka the Broad Street Bullies, are infamous for a brutal style of play that intimidates many of their opponents in the NHL.

Their loathing for their state rivals has not been helped by the Penguins’ back-to-back Stanley Cup victories in 2015/16 and 2016/17.

Sidney Crosby’s presence on the Penguins roster does not help matters, with his smooth style seen as the antithesis to the Flyers’ gritty nature.

For ice hockey fans who remember the late 1990s with fondness, the Red Wings vs Avalanche rivalry was THE nastiest of them all.

The rivalry started when the Avalanche franchise moved to Colorado and cranked up following Claude Lemieux’s dirty hit on Chris Draper in the play-offs.

No quarter was given between some of the most legendary players to grace the NHL, with stars such as Sergei Fedorov and Joe Sakic at the top of the bill.

With the likes of Nicklas Lidstrom, Steve Yzerman, Peter Forsberg and Rob Blake also in the mix, this was a golden era for the two teams.

The infamous 1997 brawl in Hockeytown remains one of the most iconic moments in the NHL, cementing the bitterness of the rivalry.

Throw in five Stanley Cup successes between them from 1996-2002 along with several play-off meetings and the Red Wings vs Avalanche rivalry takes some beating. 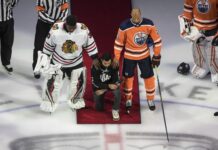 Interesting Facts About the NHL