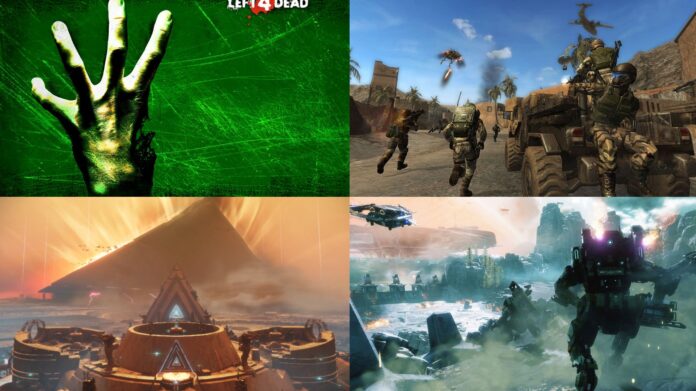 Online games are becoming increasingly popular. Simply put, no matter how much artificial intelligence has advanced to kill “live” opponents, it is far more challenging, fun, and feels better than killing those controlled by a computer. Therefore, we present 7 best multiplayer FPS games to play with your friends.

FPS Games And Their Popularity

What are the best FPS PC games right now? For more than two decades, first-person games, or more precisely, first-person action games have been entertaining us on personal computers and showing us how a shooter can be so much more than just action. From the dark corridors of the F.E.A.R. to the zombie-crowded streets of Left 4 Dead – FPS games have taken us to all parts of the gaming world. What Windows PCs can certainly boast about – is quality FPS games. What are the best games among them? What FPS titles do we keep coming back to and playing with our friends? More about this below – where we will tell you more about the best FPS games you can play with your friends.

You Can Play FPS For Free

Not all games are necessarily expensive. On the contrary, you can find very good shooters completely free of charge. However, that doesn’t mean that you will receive as a gift some of the special boosters that will help you overcome difficulties in the gaming field. But, no matter what, we should take into account the pleasure of playing and making a strategy – as well as the fact that these games are made so that you can play them with your friends. Therefore, we are sure it will pay you off.

Every time we run Steam or some other digital game distribution service – they bombard us with messages to buy something. But luckily, the PC platform has a huge set of quality free titles to offer that you can also play with your friends. Free or not, we are ready for playing. Here, we will present some FPS games you can enjoy playing with your friends.

The only difference between the amazing first sequel and Titanfall 2 – is that the second sequel has everything it contains and the first with one key improvement. That is crucial if you want to have a top FPS game – it is a balanced multiplayer mode, which is great. And that will draw you in at first even if you don’t like these kind of games or even if you’ve never played Titanfall before. Better, bigger, and more extensive than the first sequel – Titanfall 2 is a game that no fan of the genre should miss.

Undoubtedly one of the funniest FPS currently available. The charm of the game is in the fact that all together, it looks like one big, crazy cartoon. The weapons and abilities of individual classes follow that style – and we can guarantee you will have a good laugh. Don’t think that this is FPS for small children because the game is fast and has all the features of classic online FPS. If you cannot opt for one of the nine available classes, we recommend Spy.

The other part of Destiny is not a hollow sandbox that needs to be filled with expansions. It is not a space that hides behind ambiguity. The main thing in Destiny 2 has a solid story that is easy to follow. The plot is that the evil alien race Cabal attacks a large planetoid creature called The Traveler that gives immortality to the Guardians, space rangers with the task of preserving justice and honesty in space. The player remains the last Guardian with the ability to resurrect, and his goal is to help the others fight back, expel the Caballa legionnaires and save Traveler. Of course, you can also use booster services, which will help you a lot. According to lfcarry.com, Destiny 2 boosting service can help you a lot with your desired goal in the game. This game can mostly be played as a singleplayer game. Still, you’ll experience the most fun missions and best moments with other players, often outside of the main campaign.

In a relatively short time, Left 4 Dead has become quite popular due to its great atmosphere, hordes of zombies, and one of the best co-op gameplay modes we’ve seen lately. You play one round like a zombie and then one like a man trying to escape from those same zombies. It’s fascinating how the same map looks completely different depending on what role you’re in. The game is not very cheap ($ 50), but on Steam every now and then, they have promotions in which you can get the game with a 50% discount.

CoD Modern Warfare, World at War – was interpreted as an attempt by Activision to milk the CoD industry. However, the statistics are in favor of the game – and it is simply popular. The store has been moved to the Pacific where you are fighting the Japanese – and when you get tired of it, you can sniff out the Germans in the role of the Russians. As always, the multiplayer component is great.

As the name implies, the action of this Battlefield takes place a century and a half in the future. Hi-tech weapons abound, and all sci-fi fans will come into their own – and whether you like science fiction or not, you will be thrilled with the vehicles that play a key role on many maps. RPG elements and tasks to be solved in missions are an additional plus to this shooter.

Wicked enemies, great maps, and an eternal battle between aliens and humans – those are the things that keep this game alive for a year and a half after its release. But what is probably the biggest trump card – are the vehicles that contribute greatly to the gameplay. In each mission, you will have complex tasks that need to be performed – which require a lot of effort from all players in the team.

Everything You Need To Know Before Playing Destiny 2 Shadowkeep

Дмитра Врачарић - August 6, 2020 0
Telephony has come a long way ever since its inception. Nowadays, multiple technologies support audio data transmission, allowing you to communicate with your friends...

How to Get Car Insurance Coverage Online

What Questions Should You Ask Before Buying Your First Mobility Scooter?

Unwanted Facial Hair And Ways To Manage It

Where and Why to Buy Bitcoin With Cash in Sydney, Melbourne...