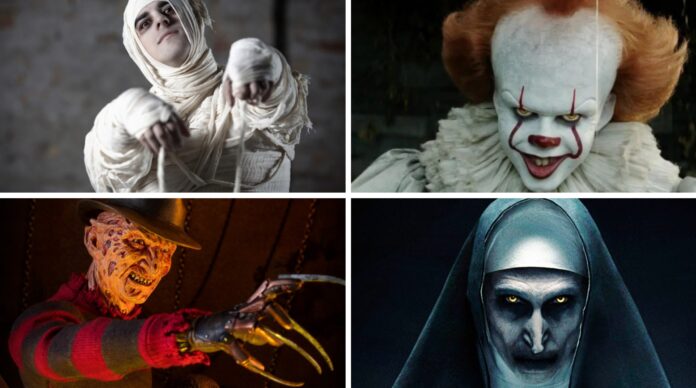 With Halloween 10 days shy from today, now would be the best time to start sorting out your favorite Halloween costume for the eve. Yes, we know Halloween won’t be the same this year, but that doesn’t mean you should not make an elaborate effort in your costume.

The genre of each costume usually ranges from trendy things to scary, spooky items. And since Halloween is all about the latter, why not mix it with a bit of trend from the cult favorite horror movies of all time.

If you live in a parallel universe and cannot relate to any of our movie suggestions, then head over to Screenbinge and fuel your mind by hooking yourself up to some of the best content of the best streaming services available online from anywhere.

Without further due, let’s explore some of the best costumes in the most popular horror movies and characters of all time that would make a great Halloween attire. You never know what you may like for yourself this season.

The oldest and the scariest doll of all time, Chucky, was one of the most bizarre characters in Child’s Play and every kid’s nightmare. In disguise, a serial killer who transfers his soul into a “Good Guys” doll tends to fool people with his initial innocence, which turns murderous and bloodthirsty soon afterward. The franchise consisted of 8 movies, which also includes Chucky’s Bride, an equally horrendous doll. If you are looking for a couples’ costume this Halloween, Chucky and his Bride will make an excellent duo for you and your partner.

Who would have thought a clown who was supposedly the most prominent entertainment source on birthday parties would be an inspiration for a Halloween costume. All thanks to Pennywise from It. as far as Pennywise is concerned, the scariest of them all was the 2017 version starring Bill Skarsgard, while the previous versions lacked certain elements that amplified the bone-chilling moment which Bill brought in his character through those eyes. One of the best and a popular costume for Halloween.

An oldie but goodie, Freddy Krueger from the ’80s A Nightmare on Elm Street. The burnt face, fedora, and those sharp finger blade gloves, more than enough to haunt you wherever you go, even in your dreams. This costume has been the spookiest and cult favorite after those typical zombies, Dracula, and other supernatural elements involved in a horror character. The most dreadful thing about Freddy is, you can’t get away from him, even in your dreams. He never dies. Good luck having a good night’s sleep now.

Even after 90 years, Frankenstein is still the classic Halloween costume that never goes wrong. An experiment of a scientist gone wrong, Frankenstein is a sewed up the corpse with a mad man’s brain. What’s more iconic than the costume itself is the way Frankenstein talks and walks. It’s like a whole package. Hence even now, it is considered the most memorable and recognizable costume. You can always churn it up and produce something new from his outfit.

Another old classic but spooky, the mummy’s costume, has become a depiction of horror now, along with ghosts, Dracula, and Frankensteins. Brought back to life by the 1999 version, the mummy was a massive hit and had to be the most effortless yet perfect Halloween costume. The Mummy franchise is still going strong with their movies, and so is the historical character. Just wrap yourself up in a roll of bandage, and you’re good to go.

People find solace in religion, but what to do if the people preaching faith turns out to be your worst nightmare? The Nun is somewhat like that. Devout Nun by the day, demonic spirit by night, wandering around in halls blending in like a regular. That’s the irony of this character, perhaps which the movie is trying to portray. The well-recognized character does not only scare but mock the religious authorities for their biases and internal hypocrisy.

When the evil takes over the good, the once good shy, and timid girl Regan Macneil who gets possessed by an evil spirit takes a 180-degree personality flip and turns into a terrifying evil little thing. Not just that, the physical appearance too is somewhat similar to a menacing grotesque figure. The glassy eyes, bloody face, and rotten teeth on Regan was a fantastic makeover that quickly changed the air that once surrounded the not-so-evil Regan.

Sometimes, too much costume and CGI can ruin the character’s essence, especially in a serious horror movie. Simultaneously, even a few items can make something look ghastly and astonishingly scary that we have a hard time getting it out of our mind. That is what The Demon from Insidious did for us. Sudden appearance with nothing but a little paint and contacts, a job well done.

Not belonging to a single movie, a Vampire or a Dracula is also one of the oldest inspirations for Halloween costumes, which depicts a blood-thirsty yet sophisticated kind who are rather intimidating instead of monstrous. You can never go wrong with a vampire, bring out your tux, wear a cape, and get your fangs out for the night, just don’t bite!

These are a handful of frightening characters that have been inspiring the masses when it comes to shopping for a Halloween costume. Even if things get mainstream, people tend to stir things up with their own creativity. Like Frankenstein gets a makeover, or the whole family tends to follow the theme of the character, Franken-Dad, Franken-Mom and Franken-Kids and so on.

Among thousands of movies, these were some of the most iconic and well-loved characters, the best part is that you won’t have to spend hundreds on this, a little paint here, fake blood there, and voila, you are now ready for some Trick or Treat!