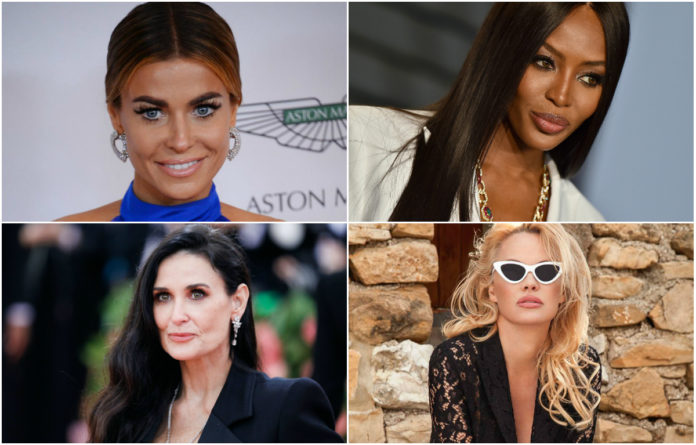 The 90s were a fantastic time, from fashion to music, to make up trends and many other things. Famous ladies had their own thing, and dark lipstick and thin, arched eyebrow were a major hit. 90s stars set up trends, and that one was a significant one.

Today we see all the silliness that time had, but still, we reminisce of some happier and simpler times. Ladies from the 90s inspired us in many things, and we all remember the sex symbols from that time hanging on our doors and walls.

Many bombshells from that era found love, while others lost it, but remained focused on other things, like their children. Here is a list of some of the most beautiful ladies from the 90s who are single today, and we are more than surprised that that is the case now. Take a look.

Demi Moore had two great loves in her life, and we are familiar with them. First was Bruce Willis, and her second husband was Ashton Kutcher. Her marriage to Kutcher wasn’t at all pleasing for the actress. She experienced many difficulties in her life, and she even ended up in a drug-induced seizure.

Today she is more present in public as she found a way to cope with everything that had happened in her life. An insider shared with People, “She was really struggling mentally and didn’t take care of herself. Now, she has a beautiful relationship with all of her daughters. Demi feels bad about the years when she wasn’t healthy. She really tries to make up for it now.”

Demi Moore shared with WSJ Magazine a couple of months ago regarding her love life, “Right now, I’m focusing on my relationship with myself.”

One of the most iconic scenes was in Basic Instinct, and Sharon Stone performed the scene flawlessly. The 90s sex symbol is in her 60s now, and she is currently single. The actress has three sons, Quinn Kelly, Laird Vonne, and Roan Joseph, and she is focused on her children now. She revealed to People during Marie Claire Power Trip last year, “This is a very good period of my life right now – my life is happy. I live in the same house I’ve had for 2 years, and I feel happy waking up in my house with my kids… We have such a lovely family dynamic.”

The amazing and beautiful actress further shared her thoughts on dating, “I think somewhere in the back of your mind you think maybe one day you won’t be a single parent. Then, eventually, you realize, I think it’s better. I’m no longer hoping for someone.”

Jennifer Aniston could easily be the sexiest woman even today. During the 90s with her hit show, every girl on the planet wanted to have the Rachel hairstyle. Her second husband was Justin Theroux, but unfortunately, the two ended divorcing each other in 2018. That wasn’t something the Friends actress expected to happen in her life, and a source revealed to People how Aniston was “sad and disappointed.” The insider further stated, he is a big believer in falling in love and spending her life with a partner that loves sharing hers.”

Some rumors about her and Brad Pitt getting back together started swirling around when he was spotted attending her 50th birthday. Aniston shared her thoughts on getting back out there on the dating field to Howard Stern, “Yeah, and I’m very busy, for now. Hey, listen, I don’t like being set up,” the actress revealed, “I don’t like it. I hate it.”

After the 90s ended, the actress started her battle with substance abuse. Page Six reported how Heather Locklear had a history of being violent with her boyfriends. In 2011 the police arrived at the scene when a fight was being reported. Apparently, Locklear and her partner at the time were getting physical. In 2012 the actress went into the hospital and later in the rehab.

In 2017 reports came about Locklear being good and healthy, but unfortunately, in 2018, Locklear had police at her door again when she became too aggressive with Chris Heisse. As of 2019, the actress decided to end things with him, as it seemed that he is the leading cause of her problems. She is currently single and on her way to full recovery.

Drew Barrymore started as a child star, and her turbulent childhood took a toll on her career. Luckily the actress surpassed it all, survived, and she is now stronger than ever. She was married to Will Kopelman, but unfortunately, they divorced in 2016. They have to girls together, and they remained focused on raising their daughter to be strong and independent women, preferably on fighting with each other and taking things too far. The actress stated to People, “Will and I continue to marvel at what we made and try to be the best co-parents we can be.”

For now, Drew Barrymore is single. She stated how she is satisfied with her current status, and shared with Entertainment Tonight her attempt to date through dating apps. “It was fun to try … I’ve been working out there in the public since I was young, so that myth of the blind date eluded me, and I always wanted to do it,” Barrymore explained. “But then it’s not blind on my side, so it just, I don’t know, doesn’t work.”

On Valentine’s Day, the actress posted on her Instagram account, “The constant love usually has been my kids and my friends. A type of love that does not require a romantic partnership and navigation … I have fought my way to deeper happiness on my own, and I love being independent!”

Carmen Electra seems like she hasn’t aged at all. She might be looking better than ever these days. In 2014 she was in a relationship with Tal Cooperman, but after three years of dating, they ended things between them. She is a fan of bad boys, and the blonde bombshell mentioned that again in 2016 to People magazine. She is single today, but her ex-husband Dennis Rodman stated to Page Six that he would like to get back together with the electric blonde. “If the opportunity were to pop up today, and if I saw Carmen, I would probably ask her to marry me again.”

Many are fearing a beautiful and successful model. Some sources mentioned how they fear for their friend Liam Payne from One Direction. The two were in a secret relationship, and his friends were afraid that she would hurt him. In the end, that is what happened. An insider revealed to The Sun, “Naomi has taken the decision to let things fizzle out. She’s just not into Liam any more and has cast him aside. Quite simply, she got a bit bored.”
On the other hand, the model stated how she isn’t ready to start a family on her own, and that that is the main reason for the breakup. She revealed to WSJ Magazine, “I’ll see what the universe brings me. Being alone doesn’t mean you are lonely. I don’t have time to be bored, and I don’t have time to be lonely.”

There isn’t a single soul who wasn’t obsessed with Pamela Anderson. Her marriage to Tommy Lee was a turbulent one since the beginning. They gt married just after a couple of days of being in a relationship. In 2017 everything seemed as it was working out for the blond bombshell. She met Adim Rami, a French soccer player, and even though he wasn’t talking much English, they seemed very much in love. After many ups and downs, in 2019, they ended their romance, and Anderson was left heartbroken. She posted on her Instagram account, “It’s hard to accept. The last (more than) 2 years of my life have been a big lie. I was scammed led to believe … we were in ‘big love?’… He used to joke about other players who had girlfriends down the street in apartments close to their wives. He called those men monsters? But this is worse … He is the monster.”

After ending her engagement with Shane Warne in 2013, Elizabeth Hurley mentioned how, when she is busy working, she doesn’t go out, and therefore, she doesn’t have time to go on dates.

The 90s bombshell revealed to Grazia, “We’ve all lived out of suitcases our entire professional lives … all of us in the public eye, we just get it. You never have any ties in our business, you can never commit. If I had to fly to New York tomorrow to work, I’d go in a heartbeat. People who aren’t in that life can find it very difficult to adapt.”

In 2019 the actress shared with Red magazine, talking about her being single, “People say, ‘Are you lonely?’ and actually, I’m really not. I’d rather be happy and single than miserable with someone, that’s for sure.”

Katie Holmes was for a very long time, married to Tom Cruise. After that, she was rumored to be in a relationship with Jamie Foxx in 2013, but that didn’t last for long. As of 2019, Katie Holmes is single and has focused on her daughter. A source shared with In Touch, “Her main focus is raising Suri [Cruise], whom she’s so proud of. Being a mom and an actress is enough for her right now. Of course, she’d like to meet her soulmate, but she’s not discouraged. She’s not dating right now, but she’s not opposed to it either. Katie is living her life, she really is in a happy place. No one needs to worry about her.”

After being married to Christopher Jarecki for twelve years, Alicia Silverstone started the divorce procedure, and as of 2018, she is single. The actress’ agent shared with Entertainment Tonight, “They still deeply love and respect each other and remain very close friends but have mutually decided to separate after being together for 20 years. They have a son together who they will continue to co-parent.”

Since then, Silverstone entered the dating game. She shared with Redbook, “Yes, I go on dates, and I find it very fascinating meeting interesting, intelligent, different people. I’m super excited about being available and open to whatever’s next. Of course, there’s tons about it that’s confusing. I call my girlfriends and I’m like, ‘What does this mean?'”

Ever since she break up from Eric Alsa in 2017, the model has been single. An insider shared with Page Six, It came drama-free, and they’re co-parenting their young son.”
The model had her son York through surrogacy. She talked about it to Entertainment Tonight, “Yeah, I don’t remember if it was, ‘Am I less than a woman?’ but I remember just thinking, ‘Oh my god, I waited too long, like, why did I do this? Like, why did I do it?’… just crazy for me — just really, really difficult.”

Дмитра Врачарић - May 28, 2020 0
Contact lenses are fabulously designed optical devices that can be worn on the cornea of the eye. People who have poor eyesight can wear...

APIs – What They Are and How They Help You Out

Everything You Need To Know About Potty Training For Autistic Kids

Reasons to Use Vitamin to Boost Your Performance

Dieting 101: How to Lose Weight in Isolation